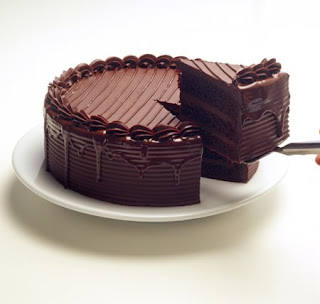 One of my readers, Kilikina, recently e-mailed me asking how I was doing since my miscarriage. After I responded to her I decided to post my response here also to update anyone else who reads my blog.

Thanks for checking up on me, I appreciate it. I guess I'm doing pretty okay. I get sad sometimes but then I remember that each and every one of my pregnancies has been in God's capable hands and this time it was no different even though the final outcome was different.

We weren't "trying" or hoping to get pregnant because we leave it up to God to decide the quantity and timing of the children He gives us. Having said that, now that I've lost this baby, I find myself hoping to get pregnant again. It's almost like someone surprising you with a big piece of chocolate cake and then taking it away before you had a chance to take a bite! Now I'm hungry for chocolate cake! I don't really know where I would put a fifth child, but I figure if God can make room for a baby inside my body(!) then He can make room in my home. Not a problem.

Of course, I see pregnant people EVERYWHERE (I notice pregnant people everywhere when I'm pregnant too), but it doesn't cause me much turmoil. I really trust God's hand in all things. Having four kids is great. Having more would be great too. He's the Potter, I'm the clay. I'll welcome whatever He gives me.

He hath made everything beautiful in His time... Ecc.3:11a

Two Peas in a Pod

Click on the picture to enlarge. I recommend it! 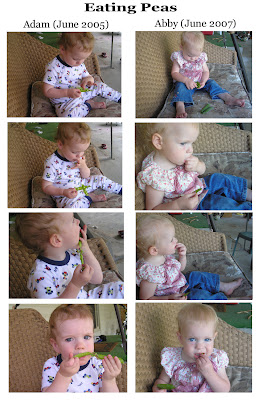 They're each 18 months old in these pictures.
Posted by Cindee at 8:00 PM 3 comments:

Jim (entering the bathroom): So you did a poo?

Adam: Yeah. My guys needed to poo too. That's their potty. 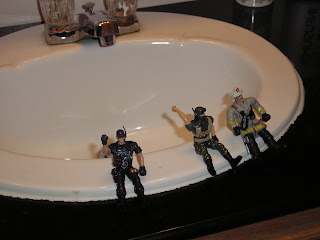 I just sent my bigs off to camp for a week. It's going to be strange without them here but I'm looking forward to some extra time with my littles.

Neither kid was nervous about going or being gone for a whole week. I'm gonna miss 'em.

I took a couple of pictures as they were getting ready to leave. Imagine that!! :-)

Posted by Cindee at 3:21 PM No comments:

We're back in Idaho

And oh so busy. Here's a few pictures of what we did last night:

You can stop/restart the slide show here.

I've been absent for a bit and I will continue to be for a little while. We're in Oregon visiting family. We've had a nice visit these past couple of days but I'm missing home and anxious to get back. I just wish we didn't have a nine-hour drive to endure before we're back home! Oh well, we always seem muddle through the drive.

I've kept up on reading the blogs I subscribe to (it's pretty easy on the weekend because the writing tapers off then anyway) but I haven't written much. We've had a birthday last week (Micah's) and there's another birthday this coming week (Rebecca's). Still to come this summer we have two church camps to prepare for, swimming lessons, VBS, and cousins' camp. I may not be blogging much even when I DO get back home. Oh well, I only blog when I 'need' to. It's a great outlet and sometimes I need it and sometimes I don't.

If you're looking for a thought-provoking blogpost, try reading God and Vending Machines over at The Common Room. 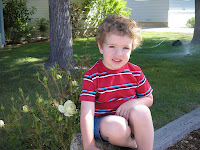 (Jim was helping Adam try on the new socks that I had just bought for him.)
Me: How do they fit?
Adam: Right fine.

Adam: (dressed in shorts and cowboy boots) How do I
look? Fancy enough?


Adam: (with a wad of something on his thumb) I seriously
found this in the play room. It's sticky tack! It's mine because I
found it.
Me: No, it's mine. But thank-you for finding it for
me.


Adam: (strutting around with a bungee cord) Your
baby's under arrest.
Me: Why?
Adam: Because I'm the policeman

I thought this was a really great story. It kinds of reminds me of the movie, Late For Dinner. Love that movie. I should go watch it...

WARSAW (Reuters) - A 65-year-old railwayman who fell into a coma following an accident in communist Poland regained consciousness 19 years later to find democracy and a market economy , Polish media reported on Saturday.

Wheelchair-bound Jan Grzebski, whom doctors had given only two or three years to live following his 1988 accident, credited his caring wife Gertruda with his revival.

"It was Gertruda that saved me, and I'll never forget it," Grzebski told news channel TVN24.

"When I went into a coma there was only tea and vinegar in the shops, meat was rationed and huge petrol queues were everywhere," Grzebski told TVN24, describing his recollections of the communist system's economic collapse.

"Now I see people on the streets with cell phones and there are so many goods in the shops it makes my head spin."

Grzebski awoke to find his four children had all married and produced 11 grandchildren during his years in hospital.

He said he vaguely recalled the family gatherings he was taken to while in a coma and his wife and children trying to communicate with him.

Posted by Cindee at 1:46 PM No comments:

Email ThisBlogThis!Share to TwitterShare to FacebookShare to Pinterest
Labels: News

With the greatest of ease

I took my kids out to breakfast this morning. All four of them by myself. It was great. They were very well-behaved and we had a very nice time. Here's a few pictures we took in the front yard after we got home. (Yeah, I know, it's mostly Abby but that's how it goes...)