The article below irritates and concerns me in way I cannot even describe. This is very, very wrong. Besides the obvious problem that parents are being denied the right to decide if they want to inflict immunizations on immunize their child or not, doesn't it seem stupid to expel the kids and then charge the parents with truancy? It seems like the school officials would at least be able to come up with a charge that didn't make them look foolish. I also didn't like the comment the judge makes at the end of the article!

(Okay, in the interest of transparency I should say that I almost fully immunized my two older kids, partially immunized my third child, but have no plans to immunize my fourth [or any others I might have]. The road to my current immunization stance has taken many years and is still in a state of development as I sort out my opinion of each and every vaccine individually. I do regret having the two older kids immunized without even a second thought. I wish I had put some amount of consideration toward it before I just went along with the mainstream thinking.)

Scores of grumbling parents facing a threat of jail lined up at a courthouse Saturday to either prove that their school-age kids already had their required vaccinations or see that the youngsters submitted to the needle.

The get-tough policy in the Washington suburbs of Prince George's County was one of the strongest efforts made by any U.S. school system to ensure its youngsters receive their required immunizations.

Two months into the school year, school officials realized that more than 2,000 students in the county still didn't have the vaccinations they were supposed to have before attending class.

So Circuit Court Judge C. Philip Nichols ordered parents in a letter to appear at the courthouse Saturday and either get their children vaccinated on the spot or risk up to 10 days in jail. They could also provide proof of vaccination or an explanation why their kids didn't have them.

By about 8:30 a.m., the line of parents stretched outside the courthouse in the county on the east side of Washington.

Many of them complained that their children already were properly immunized but the school system had misplaced the records. They said efforts to get the paperwork straightened out had been futile.

"It was very intimidating," Territa Wooden of Largo said of the letter. She said she presented the paperwork at the courthouse Saturday and resolved the matter.

"I could be home asleep. My son had his shots," said Veinell Dickens of Upper Marlboro, who also blamed errant paperwork.

Aloma Martin of Fort Washington brought her children, Delontay and Taron, in 10th and 6th grade, for their hepatitis shots. She said she had been trying to get the vaccinations for more than a month, since the school system sent a warning letter. She had an appointment for Monday, but came to the courthouse to be safe.

"It was very heavy handed," she said of the county's action. "From that letter, it sounded like they were going to start putting us in jail."

School officials deemed the court action a success. School system spokesman John White said the number of children lacking vaccinations dropped from 2,300 at the time the judge sent the letter to about 1,100 Friday.

After Saturday's session, 172 more students were brought into compliance, including 101 students who received vaccinations at the courthouse and 71 whose records were updated.

That still left more than 900 students out of compliance with vaccination requirements, White said.

"Obviously, we still have some more work to do," he said.

Any children who still lack immunizations could be expelled. Their parents could then be brought up on truancy charges, which can result in a 10-day jail sentence for a first offense and 30 days for a second.

"We have to sit down with school and health services," he said. "We haven't ruled anything out. We need to figure out where we stand."

Maryland, like all states, requires children to be immunized against several childhood illnesses including polio, mumps and measles. In recent years, it also has required that students up to high school age be vaccinated against hepatitis B and chicken pox.

Nichols said nobody actually came before him Saturday, but he was there if any parent asked to see him.

The judge noted the unhappy looks of some of the kids in line waiting for vaccinations.

"It's cute. It looks like their parents are dragging them to church," Nichols said. (emphasis Cindee's)

Several organizations opposed to mass vaccinations demonstrated outside the courthouse. While the medical consensus is that vaccines are safe and effective, some people blame immunizations for a rise in autism and other medical problems.

"People should have a choice" in getting their children immunized, said Charles Frohman, representing a physicians' group opposed to vaccines.

This is just a glossary of Abby words.

Email ThisBlogThis!Share to TwitterShare to FacebookShare to Pinterest
Labels: Conversations with kids

After hearing me mention something about my mom and dad Adam says:
"Adults don't have moms and dads, they ARE moms and dads!"

***********
Walking out of the church building last night Adam says that he forgot to give his offering and wants to go back to give it. Everyone else is in the van but Adam and I return so he can give his gift to Jesus. On the way out the second time Adam asks for me to bend down so he can whisper in my ear. We are right in the flow of traffic so I tell him to wait a moment until we are outside. We stop in front of the van (which was right outside the door) and I bend down and tell him to go ahead and whisper. After looking around furtively, he whispers, "Mom... (looks around again)...Mom, can you take me to the bathroom? I have to GO!"
Posted by Cindee at 8:39 AM No comments:

Email ThisBlogThis!Share to TwitterShare to FacebookShare to Pinterest
Labels: Conversations with kids

All the world is God’s own field, fruit unto His praise to yield;
Wheat and tares together sown unto joy or sorrow grown.
First the blade and then the ear, then the full corn shall appear;
Lord of harvest, grant that we wholesome grain and pure may be.

For the Lord our God shall come, and shall take His harvest home;
From His field shall in that day all offenses purge away,
Giving angels charge at last in the fire the tares to cast;
But the fruitful ears to store in His garner evermore.

Even so, Lord, quickly come, bring Thy final harvest home;
Gather Thou Thy people in, free from sorrow, free from sin,
There, forever purified, in Thy garner to abide;
Come, with all Thine angels come, raise the glorious harvest home.

Source: http://www.cyberhymnal.org/htm/c/o/comeytpc.htm
Posted by Cindee at 12:30 AM No comments:

See what's on other menus at Organizing Junkie, the host of MPM.
Posted by Cindee at 8:02 PM No comments:

CARRIED TO THE TABLE

Written by: Leeland Mooring with Steve Hindalong and Marc Byrd

From Leeland Mooring's Wikipedia entry: When asked about the story behind "Carried to the Table", Mooring said, "One of the evangelists [my family] traveled with for two years had a message that spoke about that story of Mephibosheth in 2 Samuel. His message moved me so much that I fell in love with that story and couldn’t get it out of my head. He related [the story] in the message to how God carries us to the table. Things I can’t get out of my head, I make songs out of them. I sat in my room and prayed to God about it. I worked on [the song] two days and finally finished it."

You can listen to this song on my Playlist. It's at the top of the right sidebar.
Posted by Cindee at 11:43 AM No comments:

This is dedicated to (Theodore) Elijah, my new baby nephew, and his parents. 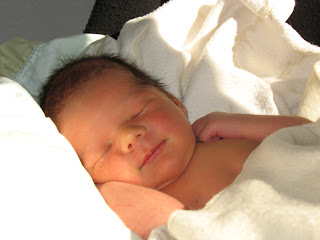 See what's on other menus at Organizing Junkie, the host of MPM.
Posted by Cindee at 7:47 PM 3 comments:

REJOICE THE LORD IS KING

Rejoice, the Lord is King! Your Lord and King adore;
Mortals give thanks and sing, and triumph evermore;
Lift up your heart, lift up your voice;
Rejoice, again I say, rejoice!

Jesus, the Savior, reigns, the God of truth and love;
When He had purged our stains He took His seat above;
Lift up your heart, lift up your voice;
Rejoice, again I say, rejoice!

His kingdom cannot fail, He rules o’er earth and Heav’n,
The keys of death and hell are to our Jesus giv’n;
Lift up your heart, lift up your voice;
Rejoice, again I say, rejoice!

He sits at God’s right hand till all His foes submit,
And bow to His command, and fall beneath His feet:
Lift up your heart, lift up your voice;
Rejoice, again I say, rejoice!

He all His foes shall quell, shall all our sins destroy,
And every bosom swell with pure seraphic joy;
Lift up your heart, lift up your voice,
Rejoice, again I say, rejoice!

Rejoice in glorious hope! Jesus the Judge shall come,
And take His servants up to their eternal home.
We soon shall hear th’archangel’s voice;
The trump of God shall sound, rejoice!