The sky didn't fall. There was no flack to be had over my
declining the ultrasound. It was great. The doctor just said,
"So you don't want to have any ultrasound at all then?"
I said not unless there was some particular problem that seems to
warrent it. The end. No problem. I then was emboldend to say that
I would also not be having the glucose screening test that was
due to happen at my next visit. She asked if I'd ever had
gestational diabetes and I answered no. Then she asked about the
weights of my previous babies, she looked at my chart and her
eyes widened and she breathed "oh!" I said she must
have looked at the weight of my last baby first! She had. Here
are the stats:

I kind of figure that THIS baby will be about 10 1/2 pounds
and will be born in the car on the freeway. Guess we'll see.

I know it’s pretty pathetic that this makes me feel good. It’s really a pretty small thing, but for me, right now, it feels kinda big. I called yesterday and cancelled my BIG ultrasound. Why? Because I don’t want to do it. Because I don’t HAVE to do it. I mean, really, they work for me. Right? Who’s in charge here the employer or the employee? I am all for demedicalizing pregnancy & childbirth. I’m taking my stand (puny though it is). This is my fourth pregnancy and it’s taken me THIS LONG to take control of my own pregnancy. For those who know what I rebel I can sometimes be, this should come as no surprise. Though it surprises me now to see how long this took. I wonder what I'll do next?
Posted by Cindee at 11:46 AM 3 comments:

The following came from an anonymous mother in Austin, Texas.

"Things I've learned from my boys (honest - I'm not kidding):

1.) A king size waterbed holds enough water to fill a 2000 sq.ft. house 4 inches deep.
2.) If you spray hair spray on dust bunnies and run over them with Roller blades,
they can ignite.
3.) A 3-year old boy's voice is louder than 200 adults in a crowded restaurant.
4.) If you hook a dog leash over a ceiling fan, the motor is not strong enough to rotate
a 42 pound boy wearing Batman underwear and a Superman cape.
It is strong enough, however, if tied to a paint can, to spread paint on all four walls
of a 20x20 ft. room.
5.) You should not throw baseballs up when the ceiling fan is on. When using a ceiling
fan as a bat, you have to throw the ball up a few times before you get a hit. A
ceiling fan can hit a baseball a long way.
6.) The glass in windows (even double-pane) doesn't stop a baseball hit by a ceiling fan.
7.) When you hear the toilet flush and the words "uh oh", it's already too late.
8.) Brake fluid mixed with Clorox makes smoke, and lots of it.
9.) A six-year old Boy can start a fire with a flint rock even though a 36-year old man
says they can only do it in the movies.
10.) Certain Legos will pass through the digestive tract of a 4-year old boy.
11.) Play dough and microwave should not be used in the same sentence.
12.) Super glue is forever.
13.) No matter how much Jell-O you put in a swimming pool you still can't walk on water.
14.) Pool filters do not like Jell-O.
15.) VCR's do not eject "PB &J" sandwiches even though TV commercials show they do.
16.) Garbage bags do not make good parachutes.
17.) Marbles in gas tanks make lots of noise when driving.
18.) You probably DO NOT want to know what that odor is.
19.) Always look in the oven before you turn it on; plastic toys do not like ovens.
20.) The fire department in Austin, Texas has a 5-minute response time.
21.) The spin cycle on the washing machine does not make earthworms dizzy.
22.) It will, however, make cats dizzy.
23.) Cats throw up twice their body weight when dizzy.
24.) 80% of Men who read this will try mixing the Clorox and brake fluid.
25.) Women will pass this on to almost all of their friends, with or without kids.

Little boys are certainly interesting as they discover the world!"
Posted by Cindee at 8:30 AM No comments:

If only we just used chopsticks...

Sure wish I could get BonusBoy to pronounce 'fork' correctly. It's sounding like he has a real potty mouth!
Posted by Cindee at 11:46 AM No comments:

Thanks to my friends Di and Ralph A'Rhea I lost about 5-6 pounds on Sunday. Wonderful friends they are. Soooo encouraging about my weight loss. I'm not so sure of their tactics though, They wouldn't even allow me to drink water! I'm not so sure sure that is very healthy. I was very thirsty and I even snuck a drink once, but Di snatched it right away, the little witch! I realized that I'm pretty thankful that these are friends who rarely visit. In fact, they only stayed about 9 hours but their visit was pretty exhausting and I'm still recovering from it. It's cool too that they have left because now I can have water!! Yeah!! I'm still apprehensive about eating real food because I'm a little worried that if I do, one of them will pop in the back door unexpectendly and take it from me. . .so I'm waiting a little longer to try solids again. Who knows what what Friday will bring? It surely can't be the first OB appointment for someone who's 22 weeks pregnant and now weighs less than she did when she first got pregnant. Oh well, I figure that by Friday, I'll be eating normally again (it's so hard for me to break that eating habit - thanks for trying, Di and Ralph) and that my weight will probably be back to normal. Sigh!
Posted by Cindee at 7:37 AM 1 comment:

Email ThisBlogThis!Share to TwitterShare to FacebookShare to Pinterest
Labels: General

I’ve been tagged by Jaymarie.

5 bands/singers that I know the lyrics of MOST of their songs:
Michael Card, Imperials (of the 70's & 80's), 2nd Chapter of Acts, Barry Manilow, Gaithers

5 things I would do with $100,000,000:
Give to friends in need; like Jaymarie, hire a housekeeper; move and buy a slightly bigger house in western Oregon; buy a big motor home; travel with my family

5 locations I’d like to run away to:
Disneyland (of course!); Alaska; Springfield, Oregon; England; Washington D.C.

5 bad habits I have:
Not letting my kids finish their sentences; watching T.V. too late when I should be sleeping; getting involved in too many projects at once; getting swept up in other people’s panic and not trusting the Lord to work out the situation ( I am getting better at this one); making messes and letting my husband clean up after me (I’m not sure if this is a bad habit or a gift from my husband that I should just be thankful for!)

5 things I would never wear:
a bikini; thong underwear (ugh!); low-riding jeans/pants; a strapless dress; anything with a plunging neckline

5 TV shows I like:
Survivor; CSI (the original one); yeah, Little House on the Prairie (my kids have just discovered it this summer); M*A*S*H; Everybody Loves Raymond

5 biggest joys at the moment:
being a mom; being loved by my husband; being virtually nausea-free; being pregnant (it IS a joy for now); being known and loved by the One who made me

5 favorite toys:
my computer; my cell phone; gee, I guess I don’t play much, I can’t think of any others
Posted by Cindee at 9:46 AM 1 comment:

Email ThisBlogThis!Share to TwitterShare to FacebookShare to Pinterest
Labels: Just for fun

Got your attention? Sorry to disappoint, but this really isn't gonna be about sex. Not in the way you might think. Julia made a comment on one of my earlier posts and it reminded me of something my dad said once when I was in high school. First of all, I have to explain the grammatical usage of the word gender:

Usage Note: Traditionally, gender
has been used primarily to refer to the grammatical
categories of “masculine,” “feminine,”
and “neuter,” but in recent years the word has
become well established in its use to refer to sex-based
categories, as in phrases such as gender gap
and the politics of gender. . .

Second of all I have to explain that I'm in no way complaining about Julia's use of the word gender, I totally get that it has become acceptable, in recent years, to use the word that way. It's just that it reminded me of this:

My dad, the English teacher, was trying to boil down the principles of how and when to use the words sex and gender. He said to me, "Words have gender, people have sex." Then he got all flustered when he realized that he said something that he wasn't meaning to say. It was funny to see my usually unflappable dad flapping!

Email ThisBlogThis!Share to TwitterShare to FacebookShare to Pinterest
Labels: General 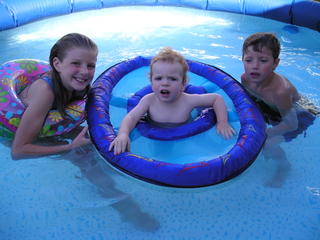 PonyGirl (9), Padawan (7), and BonusBoy (19 months). They have such fun together even though it looks like BonusBoy isn't really enjoying it. 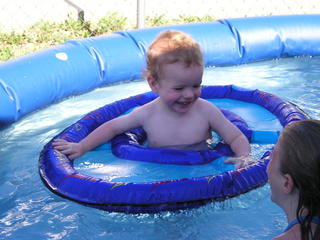 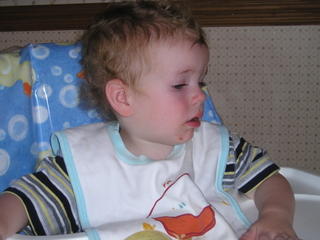 BonusBoy (19 months) falling asleep during dinner.
Posted by Cindee at 8:54 AM 1 comment:

I'm not sure exactly what say about this article, but I wanted to share it anyway. It's amazing what we are willing and able to do to preserve a life. I totally agree that keeping the mom alive until the baby could be born was the right thing. For the record, that's the decision I would want made on my behalf if ever I were in a similar situation. Blessings to the Torres family.
Posted by Cindee at 8:41 AM No comments: