That's when Abby woke up this morning and she didn't go back to sleep. I'm accustomed to sleeping until 7:30 - 8:30 depending on the day. This day isn't going so well for me! 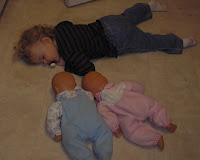 notice how her babies sleep face down like her!
Posted by Cindee at 1:35 PM 8 comments:

My mom says she can't believe that I'm that old. Sorry, mom, but it's true, whatever that says about you. :-)

I had a pretty nice day. My daughter, Rebecca, was pretty excited about my birthday and she did all kinds of things to make it special. She rigged up a sort of balloon net outside my bedroom door and when I came out balloons cascaded down all around me and the kids sang "Happy Birthday". She was so pleased that her idea worked! She put up decorations in the kitchen and made a "Happy Birthday Mom" banner with Micah's help.
Later in the day Jim and I took the kids to the rec center to go swimming (which they've been begging to do for a while now) and they had a really good time. Abby (2 years) was begging to go down the water slide but no one could go down with her. They only thing allowed was for someone to catch her at the bottom. Jim walked her up the steps and put her on the slide and let go. At the first turn in the slide Abby flipped around so she was headed down head first on her back. Rebecca was waiting at the bottom to catch her and took Abby's head right to the stomach. From my vantage point it just looked like appendages flying out of that slide. It was so hilarious. Abby disagreed. She was crying but had stopped by the time Jim got her back to me where I was watching from the edge of the kiddie pool. Abby never asked to go down the slide again.
We picked up dinner for the kids on our way home and left the kids at home to eat while Jim took me out to dinner at The Olive Garden.
(note to self: don't let them seat us in the bar area again. It's too noisy (even early on) because of the coffee grinder and the blender for drinks. It's also pretty cold there and the waiter... ugh. The waiter was SO inattentive and talked on and on with another customer about the great party he was going to later where he was going to drink all night long. His goal was to drink in such a way that he would last the entire time until the party ended at 2 a.m. No mixed drinks or shots, he said, because I'm determined to 'last' until 2 a.m. "It's gonna be so great.")
Anyhow, the food was great as usual (I had Eggplant Parmigiana) and I didn't have to cook it or clean up and I didn't have to tell anyone to "sit down - on your bottom - IN your chair - take another bite - use your napkin, not your sleeve" or any such thing.
When we came home Rebecca had the table looking festive with presents all set up. Adam was so pleased that I was FINALLY going to open the presents. I received a lot of nice and very needed things and the kids were so happy to see me opening it all up and Adam asked right away if I would share some of the chocolate with him. (yes, I did)
Then Jim asked if I maybe needed to go to the bathroom. ? Oh, yes, I guess I probably do! I figured they needed me out of there to bring out that ice cream cake I discovered in the freezer when I got out the pork steaks earlier! So I gave them plenty of time while I got engrossed in a Reader's Digest article. Then I came out to more "Happy Birthday, Mom" and got sung to again. Then Abby helped me blow out my candle. Yes, candle. Just one. 39 candles on an ice cream cake would not have been a good idea.

I got several e-cards and snail mail cards and then at the end of the day I got a surprise phone call from a very special friend. It was very unexpected and quite a treat. I got a call from JanD. She was my mom's best friend while I was growing up and she is such a special lady. Her husband was my teacher from the time I was in third grade until I graduated from high school. After I graduated they moved to Taiwan as missionaries for 17(?) years. I visited them there once and helped teach in a summer school they were doing. They've been back in the States for 6 years or so. It was so great to get to talk with her. A spectacular end to a very nice day.
Posted by Cindee at 9:52 AM 2 comments:

Speaking of the whole conception, pregnancy, and birth process being a blessing, check out this story from the UK:

Pre-born Twins Save Mom's Life by Kicking Away Tumor
by Aimee Herd : Feb 4, 2008

UK resident, Michelle Stepney and her husband Scott, were expecting twins. However, at about 17 weeks into the pregnancy, Michelle was rushed to the hospital with what they suspected was a miscarriage. What it turned out to be shocked them.

Doctors at the Royal Marsden Hospital in London told the couple that Michelle had actually had cervical cancer, but that the twins' kicking feet had dislodged the tumor! The bad news came as the Stepneys' physicians urged Michelle to begin immediate chemotherapy treatments, and undergo a hysterectomy—which would terminate the lives of her two unborn daughters.

"If I hadn't been pregnant with the twins, the cancer may not have been discovered until it was too late," Mrs. Stepney explained. "I knew I could have an operation straight away and it would cure me of the cancer, but that would mean getting rid of my babies and I couldn't do that."

Email ThisBlogThis!Share to TwitterShare to FacebookShare to Pinterest
Labels: Pregnancy

It's ALL a blessing

On the lastest Quiverfull Digest that I received in my e-mail, I read a great entry by a lady named Micklyn. I wanted to share it because I think it's so good:

Hi all.
I just wanted to share something the Lord showed me a while back when I was grieving over miscarriages. (I have had 9 pg's, 4 miscarried, 5 births... last week I had a positive hpt but when I repeated the test on Monday it was negative, so I think this 10th pg may also

miscarry. I also have 2 darling adopted sons and 1 darling stepson, so 8 children here with me.) Anyway, Hosea 9:11 reads:

"As for Ephraim, their glory shall fly away like a bird-
No birth, no pregnancy, and no conception!"

This was God's judgement on them. What struck me was not the thought that God is judging me, rather the opposite. In God's eyes, yes, birth is a blessing, but so is pregnancy and so is conception. This means that even though I don't carry a baby to term, God sees my conceiving as His blessing me!! This was a revelation.

I see now that God has been sooo good to me. For every child he has allowed me to birth on earth, he has given me another one in heaven. In the time I've had, i could not have conceived AND given birth to 10 children. But in between my full term pg's, he has seen fit to BLESS me with shorter pregnancies. For each of those I give glory and thanks to him.