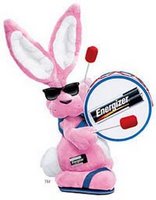 Yesterday Abby crawled into Rebecca's room and when I went in there to get her out (that room is NOT safe for an 11-month-old!) I saw that she was choking a bit on something. When I bent down to give her mouth a sweep, GULP!, down it went, whatever it was. She immediately turned and picked up a little button battery and popped it into her mouth. I swept it out and looked around on the floor. Rebecca had three of those little batteries and I could only find two of them. I knew it was VERY possible that the thing Abby swallowed was the battery.

Jim called Poison Control and asked what we should do if she had swallowed a button battery. They advised that she go to the ER and be x-rayed so we would know whether or not she had actually swallowed it. If she HAD, then we would know to "watch the diaper" for the battery to show up again. In 4-5 days if it doesn't show up they recommend a second x-ray to see where it got "hung up".

So off to the ER with Abigail. This was the first visit to the doctor (of any sort) since she was two months old. I got to find out how much she weighs: 16 lbs. 13 oz. with clothes on. At least she doubled her birth weight (8-3) before her first birthday! I also had to answer a question I wasn't looking forward to. Is she up-to-date on her immunizations? I'm not ready to deal with much opposition to my decision to delay immunizations and perhaps decline most of them altogether. Fortunately, I received no flack about that!

Eventually she went into x-ray. She pitched a total fit! You would think we were pulling out her toenails the way she carried on. She didn't like being restrained one little bit. The restraint lasted about 35 seconds. It was such an infringment upon her rights! Goodness. Anyhow, the technician went to get the developed x-ray and popped it up onto the screen. "Well," she said, "there it is." There on the film was a little shape of a battery. Great.

So now I get to go on a little treasure hunt every day or so. Should be fun. If our hunt proves fruitless we have to go back and see where the battery might be lodged. Poison Control said they have better luck with kids passing a AAA battery. Those batteries don't tend to lodge anywhere in all the nooks and crannies of the digestive system. The little ones, however, do get stuck much more easily.

The nurse sent me home with a big ol' handful of examination gloves. Yea!

Pray that everything comes out okay. I'll be praying for you. Wouldn't it be nice if that little instinct had been left out of their genetics? (The pick up anything and put it in their mouth instinct) I'm on constant doo-dad watch with my little one, too.