WARNING: I change tenses all over the place in this post. Sorry.

Yes, I know, I disappeared again. As if this isn't already a busy time of year and as if I wasn't trying really hard to get myself established back at home after being gone for 2 1/2 weeks, we just had some more "fun"!

Micah (9 y.o) started complaining on Monday afternoon that his belly hurt. All day Sunday he had been pretty, uh, gassy, much to his amusement and his sister's dismay. When he complained on Monday afternoon I figured that he had more gas trapped in his system which can be pretty painful.

We gave him some anti-gas medicine and just watched him. He didn't eat dinner very well and spent most of the evening on the couch.

Got out of bed and vomited 5 times. He felt much better, acted pretty chipper, and I thought we were done.

Micah's up again in more pain. I talk to Jim and decide to call our family doctor.

Dr. calls back, suspects appendicitis, and says he should go to the ER. I get dressed (and made-up because I'm vain!), start the van to warm up, and make a snack for myself because I'm starving.

We arrive at the emergency room. There are 3 other kids there with the same symptoms. Strange. Micah gives a urine sample, get hooked up to an I.V., gives a blood sample, and starts drinking contrast for an upcoming CT scan. He didn't like it at all and it took about an hour for him to get it down. He's the fourth one of four kids that are getting CT scans so we have to wait a while for our turn. Meanwhile, his pain starts subsiding. The lab work came back and they said it looked okay. After for-ever he gets to go for his CT scan. He loved that part. He thought it was very cool! He even loved the feeling of the IV contrast entering his bloodstream. Weirdo! But I'm thankful for the small pleasantries along the way. It takes an incredibly long time for the doctor to get back with us. The other kids start going on home and I figure we're probably next...soon...sometime? The nurse pokes her head in and asks if the doctor has talked with us yet. I say, no. Later she reports that he is consulting with another doctor. Hmm. Interesting. then the nurse comes in and put a NKA (no known allergies) sticker on Micah's ID bracelet. Hmm. Also interesting. She leaves. I inform Micah that I think we are staying here and NOT going home. He starts getting a little upset at the prospect of surgery. I try to calm him down. Really, he's doing great and he's so brave. The doctor finally comes in and tells me that he's been consulting with another doctor and was waiting for a call back and he really wanted to wait until they had a complete picture before talking with me but it was becoming an embarrassing long wait and so he was there now to talk. The other doctor called back during our conversation, of course! Yes, it's appendicitis. They need to do surgery soon the only question is where. They were trying to find an open operating room at the St. Luke's in Meridian (where we were) or in Boise.

Eventually we were admitted to the Meridian St. Luke's to await surgery. We were gurneyed to a way cool room in pediatrics. Awaiting Micah was a stuffed bear and a Sorry! game on the nightstand. There was also an extra hospital bed for me to sleep in, YEAH!!! I unpacked Micah's things from the bag they had given him, ate the other half of my sandwich, called Jim and other family members to update them and then laid down. Then the surgeon came in and introduced himself. We weren't supposed to have been admitted in Meridian. The surgery has to happen in Boise unless we wait until late afternoon which isn't a good plan at this point. He said that he told them not to admit us anywhere until he knew where he had an OR. Oh well, here we go again. He said that Air St. Luke's will transport us by ambulance (for free) to the other hospital. We will be delayed a bit by the paperwork necessary to extricate us from the Meridian hospital and get us into the Boise hospital. The 9am surgery he was shooting for may not happen until 9:30 but all is good. I've always been VERY happy with the service I receive at St. Luke's and I continue to be. I call Jim to tell him of the change in plans. 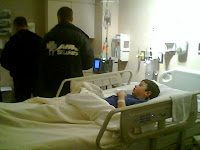 Air St. Luke's people arrive and start moving IV poles and Micah onto yet another bed and get him all strapped down and get paperwork from the nurse. Jim calls back to remind me to take pictures with my cell phone! :-) I hadn't thought of that. I'm glad he reminded me. I'm offered a ride with Micah but I need to drive me van and not have the trouble of being at a hospital in Boise with my car in front of the ER in Meridian. Plus, the ambulance isn't stopping at Mickey D's. I am. I ask the nurse if we can take the bear and the Sorry! game. She says no problem! It's a good thing we did because the other St. Luke's didn't have that perk for him. I almost didn't take it because I figured we would end up with two. I'm glad Jim told me to take it. :-) 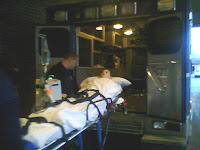 Micah is loaded into the ambulance and I follow along behind with a slight detour to grab breakfast! 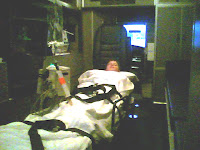 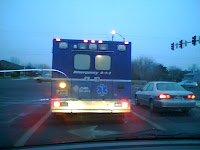 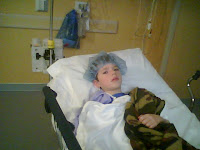 I meet up with Micah again in pre-op. I bring him the blanket he left in the van. They give him drugs to make him not care a bit (even though he wasn't really acting nervous at this point.). Though he does remember this room with the Winnie-the-Pooh winter screen saver on their computer and the movie CARS playing, he doesn't remember leaving it. I remember him leaving. Good-bye, Micah, I love you.... Take care of my son, Lord....

The screen in the OR waiting room reminds me of an airport arrival/departure screen. It states that he's in the OR as of 9:18. the surgery should last about one hour and recovery another hour. I will get to see him once he's assigned to and in a room. The screen will say when he's in Recovery I and then Recovery II and then at his final destination. I eat my breakfast, make phone calls, read and then sleep for about 10 minutes on a bench until the doctor comes out.

It was less than an hour. Yeah! He has a good report. It WAS a nasty appendix and it's good they got it out. He showed me "lovely" pictures. They did the surgery laparoscopically which makes for a faster recovery.

Micah is in his room where I've been waiting since shortly after he got out of surgery. He's sleepy and in and out of consiousness. 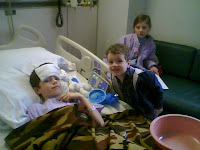 Well, that's probably enough to give you a really good idea what we've been up to this last week! Micah had lots of visitors, bearing flowers, candy, toys, and comic books. He didn't eat the candy until he was at home because even after they lifted the "clear fluids" diet he wasn't interested in eating. Popsicles, though, that was different. The first time they got him up walking was very unpleasant for him. He turned a dusky green and got really hot, sweaty, and nauseated and almost passed out. Each ambulation, though, was easier than the previous one. He rarely took pain meds after the first 12 hours or so, he got up and walked when they told him to (even though he would have preferred not to). He was a real trouper.

Jim stayed off work and on the home front keeping it together and I never left the hospital until I took Micah home Wednesday afternoon. I was very glad to get a shower and clean clothes!

I'm so thankful for: (in no order of importance!)

There are many places in the world where this little hiccup in our lives would have meant the end of my son's life. Does that make sense? It's really late and I'm expremely tired. I guess that is a combination of extremely and supremely. It fits so I'll leave it. In any case, I'm very thankful to live WHERE I live and WHEN I live. There is more to God's provision than I can go into at this time but it will suffice to say that God is good. All the time. Blessed be the Name of the Lord.
Posted by Cindee at 11:00 PM

I am so glad everything turned out so well.

WOW! Cindee, what a week!!!
I'm glad all is well now, and will pray your Micah recovers quickly.

"I'm expremely tired!"
I imagine you are.
Sleep sweet this Christmas Eve.

Thank God for HIS merciful love.

Elise @A Path Made Straight said...

Oh, Cindee... goodness! I am so thankful that things are all right with sweet Micah. This line...I remember him leaving... brought tears.
All of the references to Boise and St. Lukes made me homesick! :)
So glad all is well... Happy new year, friend!

I am glad Micah is ok. Hope to keep on reading more of your blogs.