My family and I left town early Tuesday morning, November 20th, to head to western Oregon for 5 days for Thanksgiving. I didn't return until December 8th! While we were on our way to Springfield I got a call from my mom that my sister, Junelle, who lives 1.5 hours north of Springfield was going to be hospitalized. She was in her 23rd week of pregnancy and her cervix was opening. Her midwife wanted her to go to OHSU in Portland for a cerclage. We suggested that she come down to Eugene as she would be closer to family for any support that she would need. Plus, her husband works in Eugene so it made even more sense for her to be there. Her midwife drove her all the way to Eugene and waited with her for HOURS! Midwives are awesome! Jim and I continued driving and got to town in time for my mom and I to go to the hospital. We listened as the doctor described to June and Rick (her husband), what the procedure would entail and the risks involved. Since the bag of waters was beginning to extend through the cervix it would have to be pushed back a bit before the stitch could be put in and could end up being ruptured which would end the pregnancy. If she didn't have the cerclage she would have to be on very strict bedrest to stave off labor and the doctor said she wouldn't last more than a month which would put her at 27 weeks. Still too early to deliver. They opted to have the cerclage. It was successful! Thank-you, Lord! After two days in the hospital she was allowed to come "home" to Mom and Dad's. On Thanksgiving Day! Bedrest was still part of the equation and she has a 3 1/2 year old son. Saturday, the day Jim and I were supposed to leave, only Jim and the two older kids went home. I stayed behind with the two younger ones to help out June and her son, Gabriel. Boy, I was busy!

Pray for June as she continues to take it easy and watch other people do the jobs she's "supposed" to be doing. She's to be on modified bedrest for about 9 1/2 more weeks. At that point they'll take out the cerclage and let nature "take it's course". Pray for Rick as he supports his wife though this trying time. Pray for Gabe as his world is upside-down and will continue to be until it's turn upside-down again when the baby is born. Pray for my parents as they continue to have extra people in their home and colds bouncing around from one person to the next and back again! Finally, give thanks with us that June is still pregnant and that God is so very good. All the time.

For You formed my inward parts;
You wove me in my mother's womb.
I will give thanks to You, for I am fearfully and wonderfully made;
Wonderful are Your works,
And my soul knows it very well.
My frame was not hidden from You,
When I was made in secret,
And skillfully wrought in the depths of the earth;
Your eyes have seen my unformed substance;
And in Your book were all written
The days that were ordained for me,
When as yet there was not one of them.
Psalm 139:13-16

Here's a peek at the frame being woven in secret: 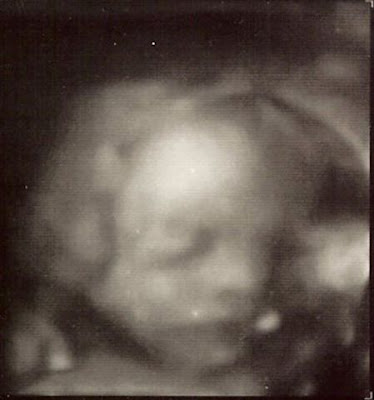