For the rest of you, here is the third (and last) installment: (Part 1 and Part 2) 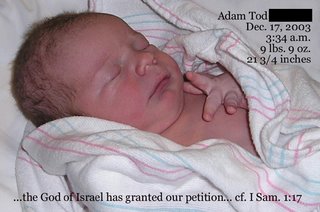 (cont.)
The nurses tried to distract me by asking if I knew what I was having (I didn’t). I replied that it could be a turtle for all I cared as long as it got out of there! “Oh, honey,” they said. “This is no turtle. It’s coming much too quickly for that!” My water broke during one of my pushes, doused one of the nurses, and got all over her shoes. I remember thinking that I hope she wasn’t too attached to those shoes. I felt mildly guilty about her shoes, for a moment. After my water broke the contractions really intensified. I just wanted to die and be done with it. The nurses realized that they would be delivering the baby without the doctor and called for some back-up. There were four nurses altogether. One nurse was sitting on the end of the bed ready to catch the baby and helping to stretch the perineum. I pushed and pushed. I entered la-la land and don’t have clear memories for the next little bit... Adam was delivered at 3:34 a.m. Wednesday, December 17, 2005. I remember seeing the pediatric nurses working on him across the room and realizing that I didn’t even know if it was a boy or a girl. I had been the first one to see what it was with my first two babies. I also realized that I didn’t even care and I thought that was odd. I was so exhausted and relieved to be done that I wasn’t even interested in the baby. Six minutes later it was time to deliver the placenta. Painful but thankfully brief. Then I started to rally. I discovered that I’d had a boy and he was 9 lbs. 9 oz. Goodness! No wonder it hurt like crazy. My first baby was 7 lbs. 9 oz. and the second was 8 lbs. 15 oz. This was a big baby and born in 2 hours 27 minutes!

I grabbed my cell phone and called my sister, Jaymarie, in California. I was giving her all the stats and chatting with her when I told her that I had to go because my doctor had just arrived and we had stuff to do. When the doctor started to inspect me and see if there was any damage, I started to get real tense and uncooperative. It might have had something to do with him telling me as he started toward “the area” with some gauze that, “This is going to feel a bit like sandpaper. Now relax your legs.” Yeah, right. Try as I might I just couldn’t relax and I kept inching back up the bed away from him. I couldn’t make myself cooperate. Since I still had that IV they shot some Demerol into it “to help me relax”. They also gave me some Phenergan (I’m not sure what that was for). That did calm me right down. The doctor was able to then do the necessary repairs. I had a little bit of vaginal tearing that was easily taken care of. This was the first time that I had delivered without an episiotomy. I cannot believe the difference in healing time. I felt so good so soon after that delivery unlike the times with an episiotomy. The cuts took soooo much longer to heal. I was grateful that I had delivered without the doctor present because he probably would have cut me. My sister, Junelle, in Oregon, reports that I also called her when the doctor was done. I don’t remember making that call. In fact later that day I finally (in my mind) called her and apologized for taking so long to call her and tell her about the baby. She informed me that I had already called her and given a full report. It must have been the meds I was on because, I really don’t remember calling her!

Initially, I was very unhappy with Adam’s birth. I felt so out of control and felt like I had done very poorly. I was also very disappointed that I had no pictures and video of this birth like I had of the others. After a while, though, I came to see this birth as the best one yet. I certainly healed much more quickly. In just a couple of days I felt like a million bucks! I was so elated to have this sweet new baby. Any crying and fussing he did didn’t seem to bother me. I just felt so incredibly blessed. I continue to feel incredibly blessed. Here’s my sweet boy now. He’s almost three. Wow!! 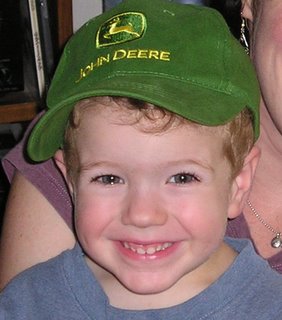