My 6.5-year-old son is on a mission to save our neighbor's life. The other day Adam said, "I don't think Jantzen's dad is very healthy." I asked why he thought that. He said, "Because he smokes." I agreed that wasn't a very healthy thing to do.

Several days later Adam entered our house saying, very dramatically, through clenched teeth, "I'm doomed!" Then he hid out it a darkened room. I asked why he was doomed. Adam explained that he was trying to save Jantzen's dad's life. "How?" I queried. He went on, "Well, I asked Jantzen if he wanted to save his dad's life. He said, 'Yes' so I told him to tempt his dad not to smoke." I interrupted at this point to say that USUALLY we are tempted to do something that we SHOULDN'T do not something that we SHOULD do, and then Adam continued. "Well, Jantzen went to his dad and said, 'Adam doesn't want you to smoke.' So I'm DOOMED!!! Those weren't the words I wanted him to say!" When I asked Adam what he did want Jantzen to say he said he didn't know but not THOSE words. I guess Adam wanted Jantzen to talk his dad out of smoking but to leave Adam out of it! :-) Adam thought he was doomed because he figured that Jantzen's dad would be mad at him. I told him that he probably wouldn't be mad.

Today, Rebecca brought me a picture that Adam had requested that she deliver to the neighbors. She delivered it to me instead. Good call, Rebecca! 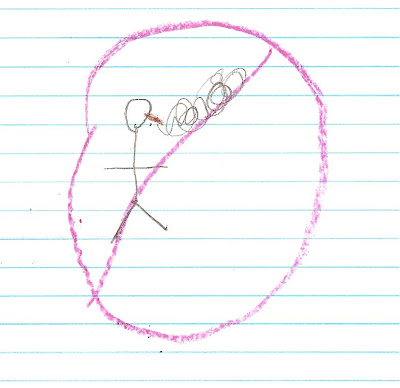